Tuesday AM, September 12, 2017
Another day without power or communications. I drive outside the neighborhood to see what is happening. Two Publix Supermarkets are open, a group of offices (doctors, etc.) are open. Not much else. Even the gas station by the Publix is closed. I thought they were supposed to have generators in order to stay open after disasters. But I’ve heard on my battery-powered radio, that even those with power may not have gas.

Trees are torn apart and uprooted everywhere, but I only spot a couple of damaged houses. Amazing!

I fill gallon jugs for me and my neighbors at the water machine outside Publix and return home. 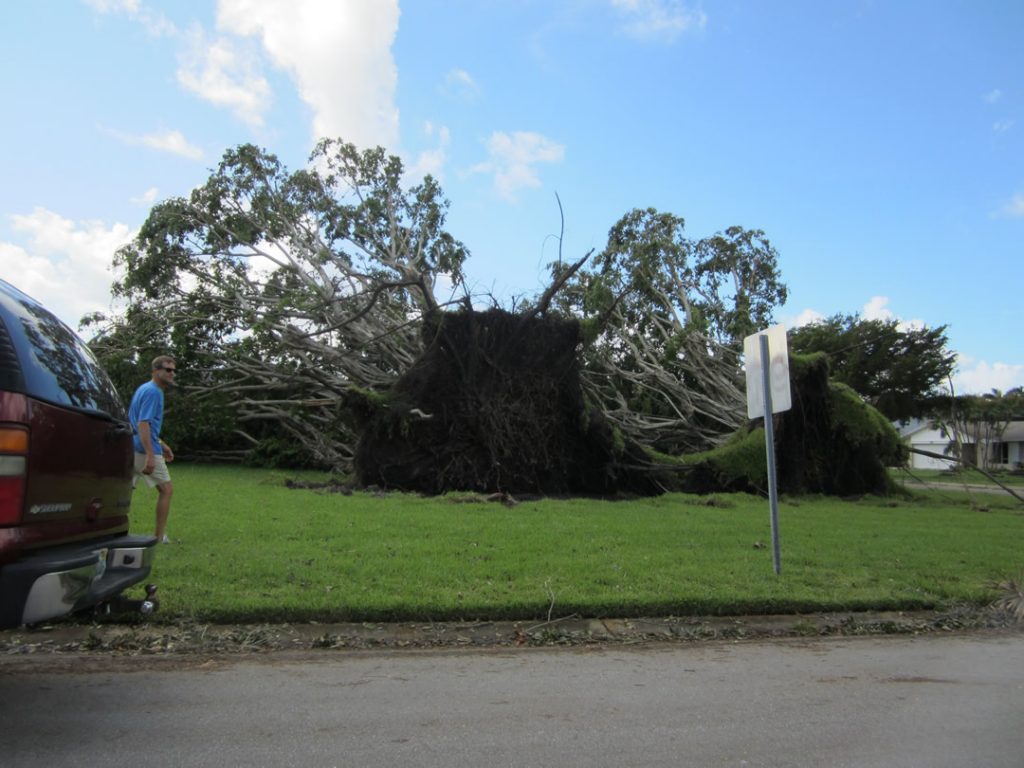 PM: Is that a generator I hear? And a power saw? Yes!

A neighbor’s brother has arrived from northern Florida. Three men join together, whipping through downed trees and branches, even an aluminum porch that blew away from one house. Francisco, Terry, and his brother Jack—what a team. They work together as an assembly line; cutting, hauling, loading, clearing my backyard along with their own. Good neighbors are a treasure.

Monday, September 11, 2017.
I won’t be able to post this to my blog until we have Internet access. Readers in other parts of the world probably have more details about the storm than I do. I have no TV, no internet access, no power, no phone service. One neighbor has cell phone service and I borrowed her phone to send a text to my family to let them know I’m OK. It feels strange without communications. I do have a battery powered radio for some news and announcements.

We were lucky here in Fort Myers. The storm went 30 miles inland. That caused it to weaken, but mostly it eliminated the storm surge. Instead, I heard that the water was sucked out of the Caloosahatchee River, which runs not far from my house. If Irma had traveled 30 miles offshore, which was predicted until very late, we would have been flooded.

Irma’s path was guesswork during the week before she arrived. Predictions showed her traveling up Florida’s east coast, west coast, and right up the middle, changing often from one to the other. It even changed after Irma decimated Key West and headed for the mainland. Offices and businesses were closed, and meetings were cancelled all over the state. Three of my mid-month writers’ meetings were cancelled. I wish they were still happening so that I could socialize and discuss the storm.

I have my neighbors to talk to, and a friend stopped by today on her way to check on her home. She drives a pickup truck so can get around fairly well. She lives in zone A and had mandatory evacuation early. The friend’s house she went to ended up directly in the path of the storm. The eye passed over them. Much more damage and water there than at her house.

Neighbors are wonderful. My front yard is mostly cleaned of debris thanks to them. I’m getting too old and my knees protest too much to do a lot of cleaning up on my own. I was here for Charlie (2004) and Wilma (2005) and spent the days after working in the yard cleaning up. I feel guilty not being able to do the work this time.

Irma was stronger, larger, and lasted longer than either of my two previous experiences. The winds were fierce all day yesterday, Sunday. We had horizontal rain, first from the west, then north, then east. The eye passed to our east about 7 PM. I stayed in my home, a sturdy cinderblock ranch built in the 1950’s. At 2 PM Saturday, we were told to evacuate (zone B) due to possible storm surge. By that time, all the shelters were packed and hotel rooms hadn’t been available for days. To go north made no sense. You would be caught in lines of traffic and probably couldn’t outrun Irma. They were saying if we had friends inland, like Lehigh Acres, go stay with them. (Guess what? The eye of Irma passed directly over Lehigh.) Many in my neighborhood stayed.

We all survived. Our homes are intact. One house has a tree propped against the back. Luckily no one is living there. An older couple recently moved out, and the house hasn’t been sold. There are many trees and branches scattered across lawns and streets. Some trees came up by the roots because the ground was already saturated from a “pre-tropical” storm a couple of weeks ago (15+ inches at my house). I have no idea how much rain came with Irma. My rain gauge overflowed at 5.5 inches. I emptied it early with 1.3, and after with 1.5, so we had at least 8.3 inches. Probably lots more. Our neighborhood was built very well for drainage. Even though the water covered the street during the storm, it was gone by this morning. No one’s house was flooded.

This is not true for others. My heart goes out to those whose homes were damaged or flooded and to the people on the islands that were devastated by Irma.

Please excuse any strange happenings on my blog in the next few days or weeks. Those of you who know me understand that I design websites. I’m going to do some experimenting with plugins here on my blog before foisting them onto some of my clients.

This may turn out to be fun… or it may be chaos. 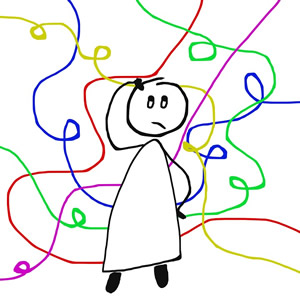 Update: I had success with creating an Index of Reviews by Author. Check it out here.

Sorry folks. I’ve shut down my comments for a while. I’ll open them up again when I think the problem is solved. My comments were hacked and I received over 1000 comments in less than 2 days. So I shut down comments, but that didn’t stop them all. Apparently they can get in directly through the comments program. I turned on the Akismet plugin and that appears to have solved the problem. I’ll wait a few days and then allow comments again.

For those of you who want to protect yourselves from the same problem, here is a link to directions on how to set it up on WordPress.org: http://codex.wordpress.org/Akismet