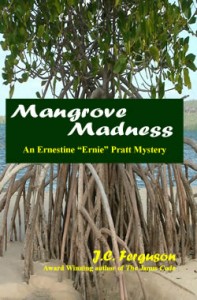 One missing person turns out to be four, then three more, in this newly minted PI’s first real case.

J.C. Ferguson’s Mangrove Madness is a rollicking good ride. In this PI story, with a pinch of cozy and a dash of hardboiled, Ernestine “Ernie” Pratt, finds herself caught up in a missing persons case that has as many twists and turns a mangrove root. A single woman, closing in on 30, marriage-shy but definitely interested in men, Pratt is surrounded by as quirky a cast of characters as you’d expect to find washed up on the Florida Gulf Coast in winter. She has all of the requisite smarts, courage and self-deprecating humor, and Ferguson presents her with a great colloquial narrative voice. I definitely see a series character.

–David Daniel, author of White Rabbit and The Marble Kite.